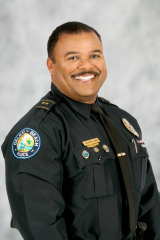 DBPD Police Chief Javaro Sims was born in the City of Boynton Beach, Florida. He is a graduate of Lake Worth Community High School, Florida Agricultural and Mechanical University (FAMU) in Tallahassee, where he obtained a bachelor's degree in physical education and parks and recreation and Lynn University in Boca Raton where he obtained a master’s degree in criminal justice administration. He also graduated from the FBI National Academy’s 255th Session, University of VA., in Quantico, VA. He has attended Future Law Enforcement Executives, Future Police Chiefs, Senior Management Institute for Police Executive Senior Management Research Forum, and the Southern Police Institute (University of Louisville).

He is active in the Delray Beach community and with its youth. He lives by the words his parents instilled in him: “A legacy is about what you do for others and not what you do for yourself” and “Be the author of your own book of life.” In 1980 and 1984, Assistant Chief Sims qualified for the Olympic Trials. He also played football in the Canadian Professional Football League (CFL) for two years. After graduating from college, he worked for four years as a schoolteacher. In his final year as a schoolteacher, he applied for a law enforcement officer position at the agency. He was hired in 1992. His career at the police department includes sergeant in the community policing and street-level narcotics units and community patrol division, as well as lieutenant in the West Atlantic Avenue Task Force Section and commander of the community response, criminal investigative, support services and community patrol divisions.