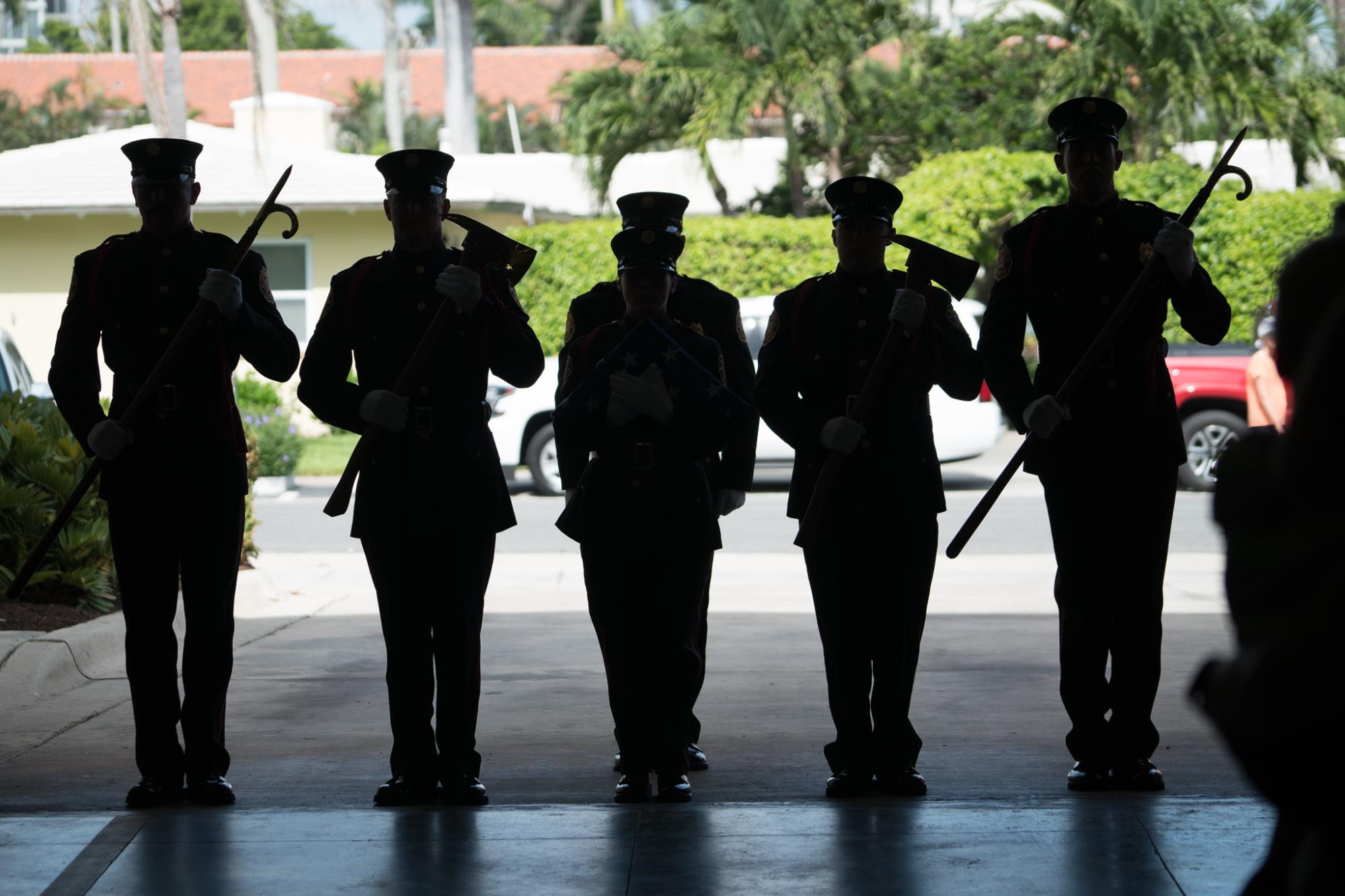 The Town of Delray voted on Sept. 19, 1911 to incorporate with 56 citizens voting in the affirmative. On July 29, 1912, the new City Council approved an application for franchise to construct a water works system in the town. On August 12, 1912, the City Council discussed organizing a fire department. This was the first mention of a fire department in the minutes of the newly formed Town of Delray political history.

Our dedication to duty and pursuit of job knowledge at the Delray Beach Fire Department has its roots in the beginning of the Fire Department on October 1st 1917, under Chief, F.A. Leanard the first Fire Chief, Volunteer. October 14th, 1918, D.J. Davis was Fire Chief of the Volunteers. On October 9, 1919, A.F. Miller was appointed Chief. In those days, Delray Beach was a sleepy farming community spread out over much the same area it now occupies. It had its tourist season to be sure, but for the most part it was rural in attitude and make up.

The first piece of fire fighting equipment arrived in 1919, a hand drawn hose cart. The downtown area had a water tower and a few fire hydrants to use for fire protection. They had no pump or motorized vehicle to respond, so they bought a hand drawn hose cart with several hundred feet of hose. The firemen would respond on foot to the fire dragging their hose cart and then hooked up to the closest hydrant, using the pressure the water tower developed for their fire streams.

Chief O. Helland was appointed Chief in 1921 and the department took delivery on their first motorized vehicle. An ordinance creating a fire department was approved on February 28th, 1923. View the ordinance.

A Brockway Torpedo and 1000 feet of hose. Dewey Morris was appointed Fire Chief on January 14th 1924. In 1924 the first public fire was responded to by motorized fire equipment. The fire was at the Tembrook Garage and Machine Shop.

On March 18, 1925 the Delray Beach Fire Department was called to help fight the fire at the Breakers Hotel in Palm Beach. Fire departments from Ft. Lauderdale to Ft. Pierce responded to that fire.

On November 8, 1926, Lonnie Cook became the first paid Fire Chief with John Gregory as his assistant. Until that time Lonnie Cook was a combination Building and Electrical Inspector. Now the Chief and his Assistant could devote all their time to the volunteer firefighters and fire protection.

On September 16, 1928, Delray Beach was hit by a major hurricane and the Fire Department played a major role in protecting property and saving lives. In a journal of Lonnie Cook, he states: "The emergency alarm was sounded at 3:00 PM on September 16, 1928 and the Fire Department was here and ready in no time. We organized a First Aid Station in the Chamber of Commerce Hall and moved from there to City Hall after the Chamber Building was wrecked beyond Safety. Men, women, and children were brought from buildings and automobiles and kept in the City Hall until the storm was over and help came from other organizations and moved them to the Alta-Repp Hotel."

The Fire Prevention Bureau was also started in 1928 with the adoption of the Fire Department Ordinances on Feb. 13, 1928. During these first years they literally took the Department from hand drawn fire equipment into the modern era of motorized fire pumpers and rescue crews. In fact, Delray Beach was one of the first places in the country to offer fire-rescue units.

With the advent of World War Two, Chief Lonnie Cook and Assistant Chief John Gregory went to Boca Raton Air Field to head up the "Crash and Structure" units. Victor Croft took over as Chief of the Department with Dan Meadows heading up the Volunteers. Croft served until 1945.

About that time the first paid personnel were hired to compliment the force of volunteers. These paid men, Thomas Lyman, Stump Wilder, Ward Williamson and Richie Knapp, worked twenty four hours on and twenty four hours off. In addition to Saturday morning training with an extra "Kelly" day off every fourth weekend.

John Gregory returned to Delray Beach after the War in 1945 and was Chief until 1967 when health problems forced his retirement. During his term as Fire Chief there were many changes in Delray Beach and the fire service. Delray Beach was growing -- by 1956 there were 15,000 people living here. More tourists began to discover Delray Beach.

In 1967, Joe Quinn succeeded Chief Gregory and chose as his assistant Clarence Cook (Lonnie Cook's nephew). Chief Quinn's brief stay as Chief cannot minimize the impact and contributions made to the Fire Department. During Quinn's term a new fire station on SW 15 Street (now Linton) was built and we saw the demise of the Volunteers and replaced by full time paid firefighters.

In 1971 Joe Quinn retired and Clarence Cook was appointed Chief and Paul Wickert became his assistant. (The name Assistant Chief was changed to Executive Captain.) 1973 brought about the EMT (Emergency Medical Technicians) and a new Rescue Unit donated by the Women's Club. The fire and rescue runs increased, the number of rescues far out numbering the fire calls. By the end of Chief Cooks term of office in 1977, rescue was a vital part of the Fire Department's operation.

In 1977 Captain Todd Jackson was appointed Chief and his Assistant Chief was Paul Wickert. Chief Jackson's first priority was to implement an Advanced Life Support Service which included Paramedics and ALS equipment. The Fire Department received a Class 4 rating from the ISO and improved Fire Insurance Rates for the City. Additionally, Chief Jackson, Jim Rasco, and Dr. Carlos Smith organized and started the Fire Academy at South Technical Educational Center, where all successful graduates could get state certification as firefighters.

Chief Jackson served as President of Palm Beach County Fire Chief's Association for two terms. Jackson was responsible for a fourth fire station at the intersection of Barwick and Lake Ida Roads. Chief Jackson had to retire early due to health reasons in November 1984.

The City of Delray Beach went through some major changes during Chief Koen's term. The Utility Improvement Bond and The Decade of Excellence Bond paved the way for the Fire Department to make improvements to all its facilities, a new station on the Beach (Stn.2), a new fire station on Linton Blvd. (Stn.5), a new Fire Department Headquarters at 501 W. Atlantic Avenue, and upgrading of most of the equipment and apparatus.

One of Chief Koen's priorities was education. Many personnel attended the Executive Fire Officer Program at the National Fire Academy in Emmitsburg Maryland, and from that exposure many new and innovative procedures began to surface.

In 1994, Chief Koen was offered the position of Fire Chief in Boca Raton, Florida and accepted. Bob Rehr returned to Delray Beach from West Palm Beach and was appointed Fire Chief. Chief Rehr brought with him the same professional standards the department was accustomed to and continued the forward motion of the department.

In January 2001, Kerry Koen returned to Delray Beach as Fire Chief. He continued upgrading the department, improving the facilities, the fleet, and the use of technology. The focus of the department has been on serving the community. Over the years, Chief Koen has tried to focus the staff on providing the community with the "wow" factor that comes with going the extra mile. The employees of the department are empowered to solve problems. They are encouraged not to just think outside the box, but to get rid of the box. That focus is now a way of doing business at Delray Beach Fire-Rescue. Chief Koen retired from the department in the fall of 2007.

Many thanks to Bill Rego, Rick Lee, Todd Jackson, and Ellen Wickert for their contributions on this website.

Free viewers are required for some of the attached documents.
They can be downloaded by clicking on the icons below.