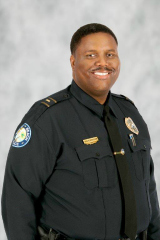 Captain David Weatherspoon was born and raised in Delray Beach. He attended local schools and then joined the U.S. Army, serving a tour in Desert Storm. After returning home, he continued to serve in the National Guard.

Captain Weatherspoon started at the Delray Beach Police Department in 1993. He was a part of the K-9 program and served in that capacity for 6 years. He then returned to Community Patrol and shortly thereafter was promoted to sergeant.

Captain Weatherspoon assisted in creating the original Problem Oriented Policing (POP) Unit. He was the sergeant of the POP Unit for several years and truly enjoyed that position as it allowed him the opportunity to work with our citizens and help to make our neighborhoods safer. Captain Weatherspoon is currently the commander of the Support Services Division.

He has a bachelor’s degree in Public Administration from Barry University and a master’s degree in Organizational Leadership from Palm Beach Atlantic University.